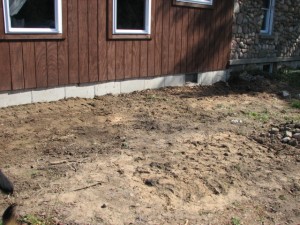 This is the eastern border of the cemetery area after several tillings. The soil was predominately clay so to lighten it and provide better drainage, we added peat moss, organic matter (leaves from last fall), a few cart loads of sand and a top layer of compost. After tilling those in until they were quite well mixed, we turned in some rocks of various sizes by hand. 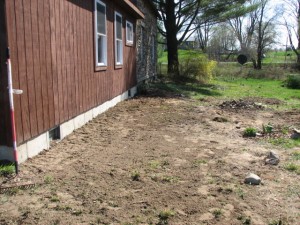 After that, we hand graded it with rakes and created a gentle slope away from the house, instead of it sloping a bit in to the house as the contractors had left it. Why they thought that was a good idea and then then gave it a sharp slope downward further away from the house is a mystery that will likely never be solved. Grr. Anyway, after many hours, we fixed it. 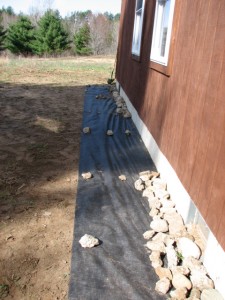 One of my prime goals in creating this Gothic cemetery is for relaxation. With lots of writing projects on tap and deadlines, weeding is very low on my priority list  🙂  So, to help eliminate the need to weed, we installed weed barrier and added rocks because – if you haven’t already guessed this – I like rocks!

There are pros and cons to using weed block, each gardener has to assess which outweighs the other for them. For me, living with some of its downfalls is well worth it for us.

The line here is straight, but it won’t stay that way for long *grins*