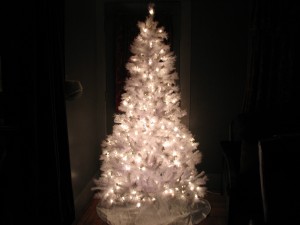 It’s that time of year!

People are frenzied and stores are churning with people.

This year, Lain and I decided to do something a bit different that we’d like to share with you. A Gothic Christmas!

Choosing decorating schemes for Christmas is as fun and individual as choosing themes for our house in general. If we’re going to do it, it may as well fit our unique style – after all, we’re the ones who have to see it all the time and deal with hassle of set up and take down.

I pondered a few different colored trees ranging from black, to red, to purple to white. Normally, I’m not a white person (who’d have guessed?) so I almost dismissed the idea of a white tree. However, our living room themes are charcoal grays, deep reds and black and so, most of my favorite colors would blend in too much.

I chose white so it popped against the charcoal walls and black couches. 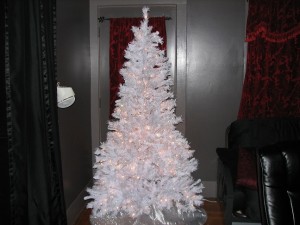 Then we deboucherized the white! Muaha

Because its an artificial tree, regular garland would be a little too ‘fluffy’ and same old in comparison with the ‘needles’ of the tree. Instead, we contrasted the needles with a mid-width black satin ribbon. As a side note, I might choose a thicker black ribbon next year, for now the mid will do. 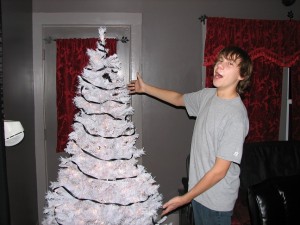 (That’s our son Gabe, magician extraordinaire, pretending he made the tree appear out of thin air!)

We also took red velvet curly ribbon (originally for gift-wrapping), broke it up and hung it in tendrils to contrast with the needles and the satin. The thin black feathers add yet another layer of texture. To make these, I used craft feathers and wrapped them together in threes with black thread – super easy!

We also cut apart red berry branches and stuck them within the boughs for added pop. You can’t see the crystals very well in the photos, but the bigger berry branches have crystal clusters that shine nicely in the clear lights. 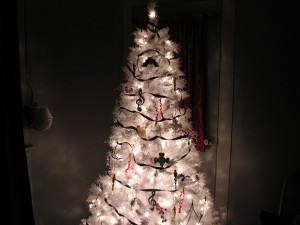 Then, we added the glittering balls and icicles in silver and gold to add some metallic gleam.

And what would a gothic Christmas tree be without – spiders? Next year, I’ll be adding more spiders and maybe take the time to make them glittering metallic webs to lurk on.

Then, we topped the tree off with our crystalline entity (go Star Trek!) tree-topper! Let’s just hope it doesn’t start devouring everything! 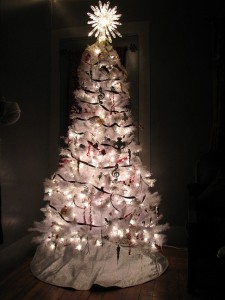 Now we’re all set for our month of Gothic Christmas fun! 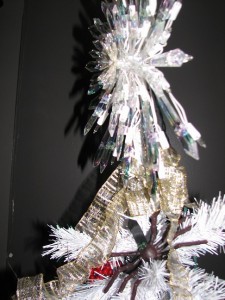