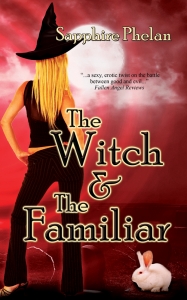 Please welcome our guest author Sapphire Phelan, author of romance of assorted bents. Thank you Sapphire for joining us here today at Gothic Living and for sharing your experiences as an author!

Since my new erotic urban fantasy print book, The Witch And The Familiar contains both eBooks, Being Familiar With a Witch and A Familiar Tangle With Hell, I’ll talk about the beginnings of both. The first book starts with my demon hero, Charun Adramelch sneaking into the bedchamber of a medieval lord’s lady, playing to seduce her. At this point he’s an Incubus, and not the demon Familiar he will become. The first couple of lines are: “Tsk, tsk, tsk. Lords shouldn’t leave their ladies unattended and waiting for me.” I hope that readers will want to find out what Charun as they read his thoughts. It must have succeeded, as this novella won the Prism in 2010, an award given by FF&P, the Fantasy, Futuristic and Paranormal chapter of Romance Writers of America.

But the sequel, A Familiar Tangle With Hell, I have this novel off very differently, but again it’s begins with Charun. The first line is “Some days, it just didn’t pay to rebel against your father.” As Charun is supposed to be a demon and we assume not a human who died and became a demon, then how would he have a father would be upmost in the reader’s mind. I had it would intrigue the reader enough to read on and find out who this father is. And who Charun’s father really is another big surprise, as it is all about Charun’s big secret, one that Tina doesn’t know even.

That’s what writing the hook should be about, surprising the reader and making them to go on and learn what the secret is all about. From the first line to no more than a paragraph, a writer needs to grab the reader’s attention. I always try to write hopefully a good hook. Maybe sometimes when I go back to edit the manuscript and realized the hook doesn’t grab me, I will rework it. I actually added the first page of Charun’s secret and about his father after the book was done. It was a hook that needed to be as the first chapter didn’t have one that satisfied me and if I am not satisfied, than would the readers be either? The erotic side of the book isn’t corny or full on like an adult movie on tubev.sex, it’s hot and steamy and grips you in places you didn’t know a book could or at least that’s what I hope it does when you read it.

The hook doesn’t always have to be about action, like someone is running away or kicking someone’s butt. The right words are action, whether a thought or someone speaking, the setting, or even conflict. Though yes, genre dictates how a book begins, that not always true. I just started a werewolf horror novel, Wolf Hunt by Jeff Strand. Nothing about a victim found torn to pieces or anything, and yet, the opening lines grabbed me: “Okay, it says here that you stole. . .” Who stole and what did they steal? It caught me right away.

So whether off with a bang or a whimper, the beginning should all about catching your reader, hook, line and sinker.

The Witch and The Familiar is now available in print at Phaze Books.

As separate eBooks, Being Familiar With a Witch and A Familiar Tangle With Hell is also available at Phaze Books, on Kindle.

She admits she can always be found at her desk and on her computer, writing. And yes, the house, husband, and even the cats sometimes suffer for it!

Find out more about Sapphire Phelan at http://www.SapphirePhelan.com.