If you follow my blathering on Facebook, you’ve probably heard a lot about my bedroom tank – the 55 hex. Now you can see it for yourself  🙂

Be kind – this is my first real attempt at pulling together a permanent tank, my others are temporary and usually in states of flux – when they become permanent, then I’ll post more! This is what the tank looked like when I purchased it from a gentleman who was moving and didn’t want the hassle of moving the tank with him: 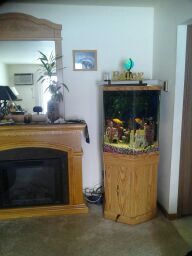 It had blue, pink and white rocks with lots of artificial buildings. Since brown doesn’t go with my bedroom decor, the stand and edges of the tank are now a metallic pewter with silver swirls. After cleaning the daylights out of the tank with a water & vinegar mix, we thoroughly rinsed it and had to reseal all the corners because the gentleman scraped all the silicone off at the advice of VIP Pets *grimace*, then we  set in the corner of our bedroom. 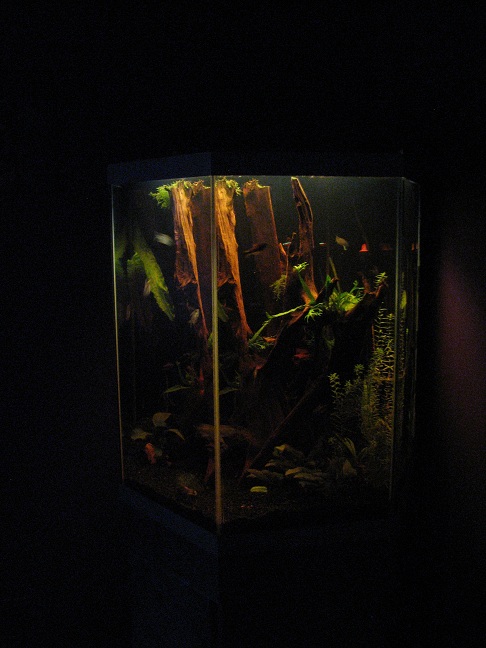 The above photo is what the tank looks like from the side, when you enter the room. As a note, the rotala indica will be moved to the new high light 20g on my desk – once it’s set up. It’s doing okay in the hex but the tetra swarm are too rambunctious so there’s always leaves torn and floating in the tank and it’s growing leggy, as you can see because of the lower light environment. I knew it was chancy when I put it in there and still, it’s not doing horribly, just not as well as I’d like. 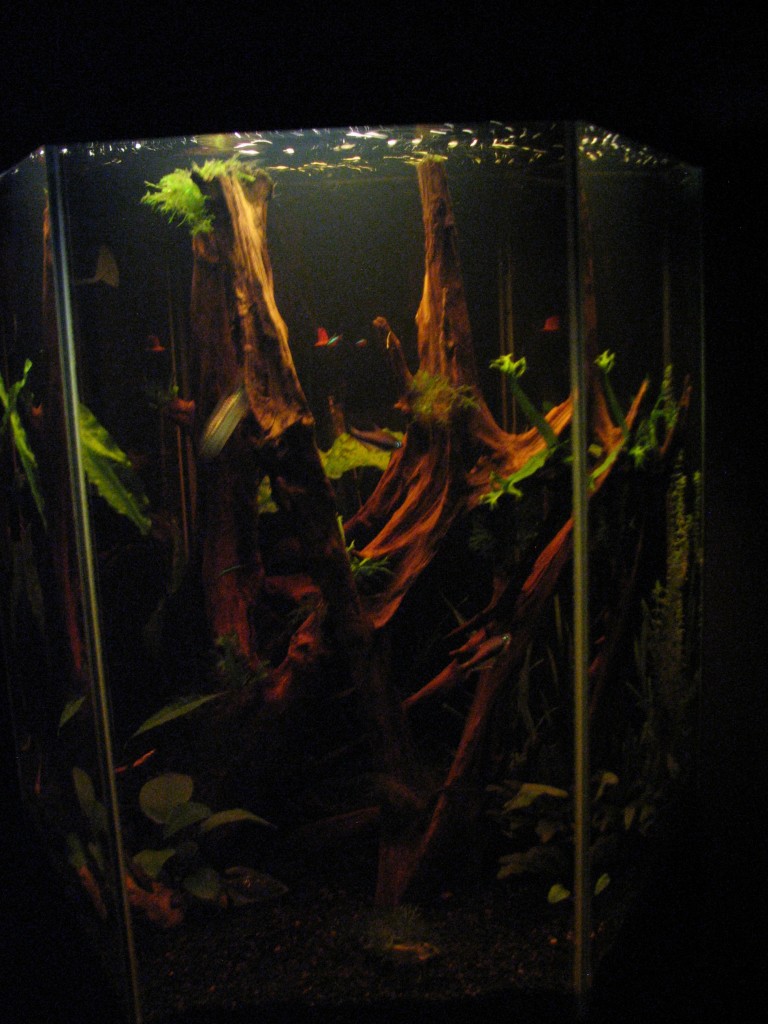 The above view is more from the front, what you’d see from the bed and middle of the room. 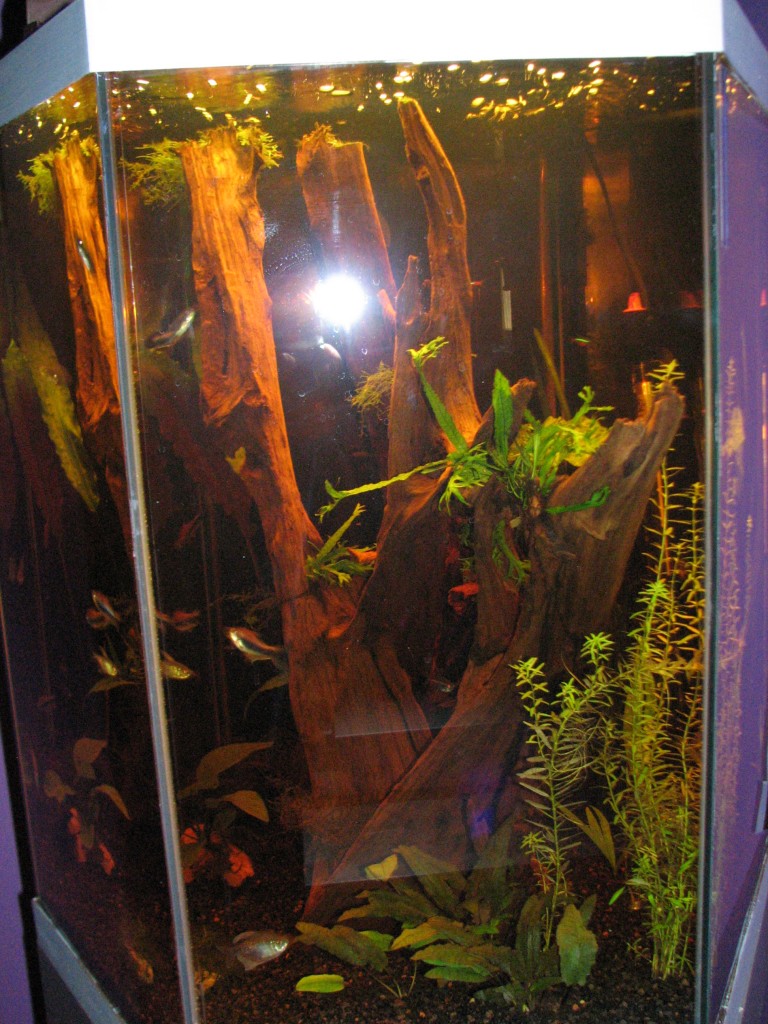 This is a brighter picture from the side, when you walk into the room. The silver shows, the rotala is easier to see and the purple from the walls reflecting off the other side  🙂  The bottom plants are crypt wendtii bronze – they’ve doubled in size and amount since putting them in. Very pleased! Attached to the driftwood are bunches of lace java fern and java moss.  In the back to the left there’s an anubias attached to a rock. Also getting in the photo are some diamond tetras and emperor tetras. 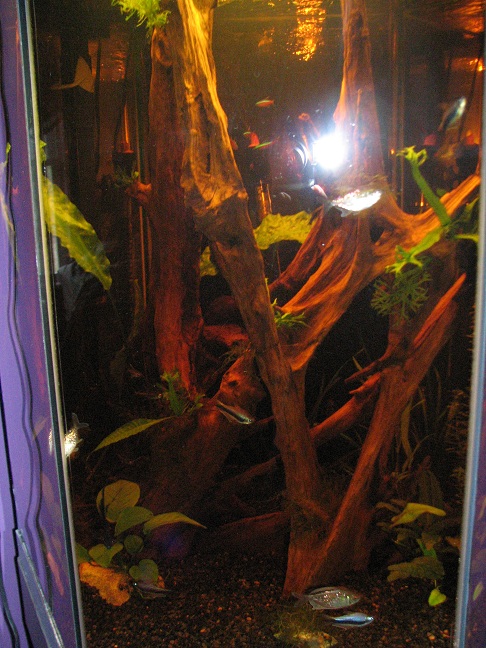 This is a brighter pic of the front, visible from the bed and middle of the room. There’s a better image of the diamonds and emperors, plus the cardinal tetras are getting some action at the top rear. Also visible are the crypt usteriana which are also doing stellar (they’re the big long leafed plants to the left and rear – the deep red at the bottom of the leaves (not visible in the pic) is fantastic! 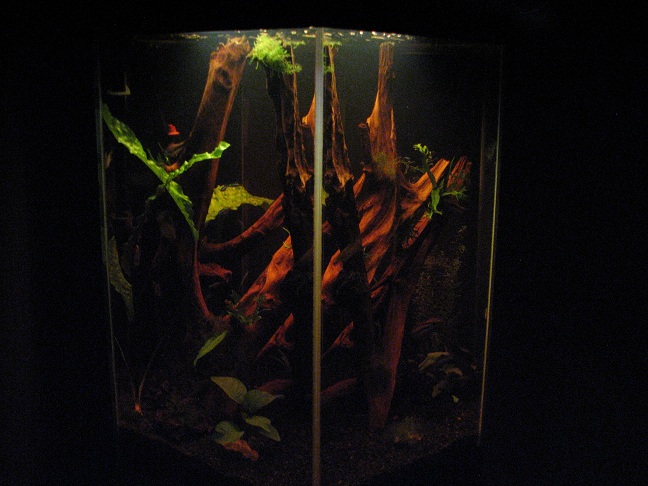 A central picture showing both prime sides. the back is still a bit bare until the vals (the grass like pants in the background) grow in. Eventually they’ll form a jungle thicket back there and reach the surface of the water, gracefully draping over it. Just takes time. 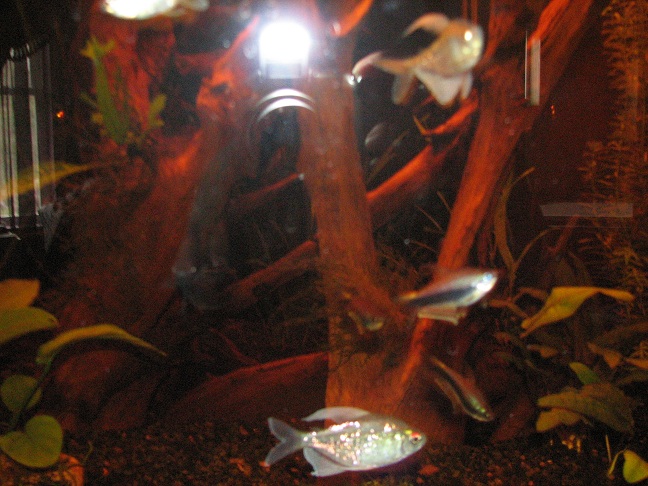 Love the way the diamond tetras shine! It’s unfortunately difficult to capture the colors of the emperors though. Grr. 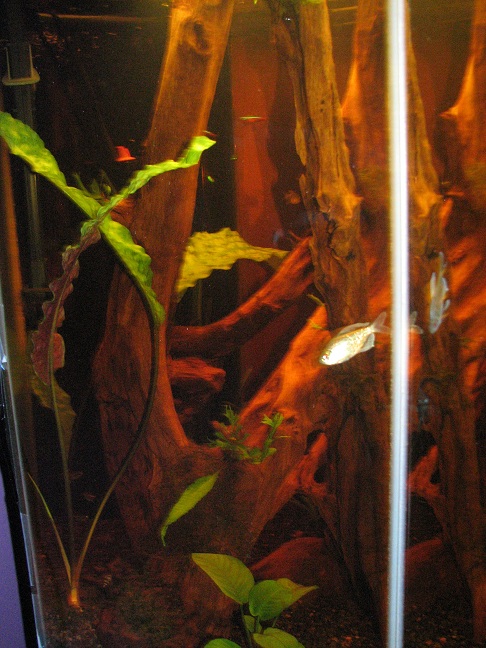 Better pic of the usteriana and the red underbelly. These two will get far larger and have more leaves in time. 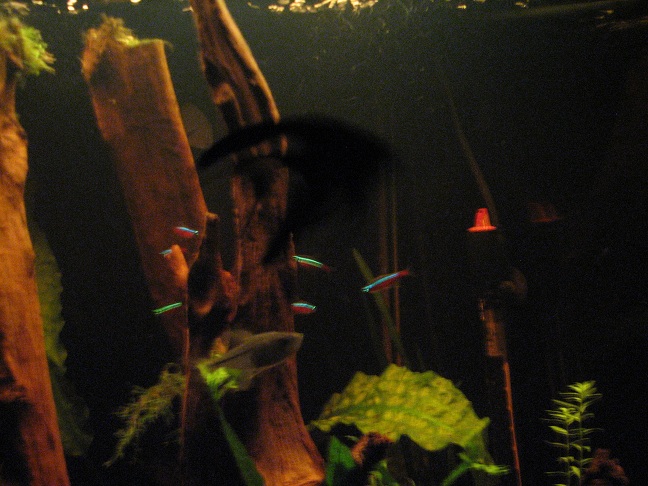 After multiple attempts to get a decent picture of Ramiel, the black angel fish, this is the best I could do. He just fidgets too much and his dark mahogany coloring is difficult to capture. Along with him are a diamond and the cardinal tetras.

Anywho, those are the ones that I could catch on camera. There’s others in there but they’re a little shy and the plants aren’t fully grown in yet but *shrug* they will be!

All plants, fish and the driftwood are from Blue Fish Aquarium in Grand Rapids, MI which is the only place I purchase livestock from. Substrate is Carib Sea Eco-Complete – highly recommended however, when their package says your water will turn cloudy they LIE! It doesn’t turn ‘cloudy’ it turns into a darned mire and looks like you just siphoned water into your tank from some ancient mucky swamp. It takes about 24 hours for it to settle and finally get ‘cloudy’ and that’s with filters running. Another note, some people rinse it – please don’t do that. Part of the reason of getting this particular substrate and ones like it is for the beneficial bacteria impregnated within.

Anyway, it was a fun venture and we’re still not 100% done. We’re in the process of designing a custom LED light system for it that is plant compatible.  I’m trying to talk Lain into designing the exterior of the fixture to look like a UFO or the star ship Enterprise  *grin*, it probably won’t fly (no pun intended) but worth a try!