Yay! We Have Maggots in the Tank!

Posted by Raven Bower on October 30, 2013 in Gothic Living | Comments Off on Yay! We Have Maggots in the Tank! 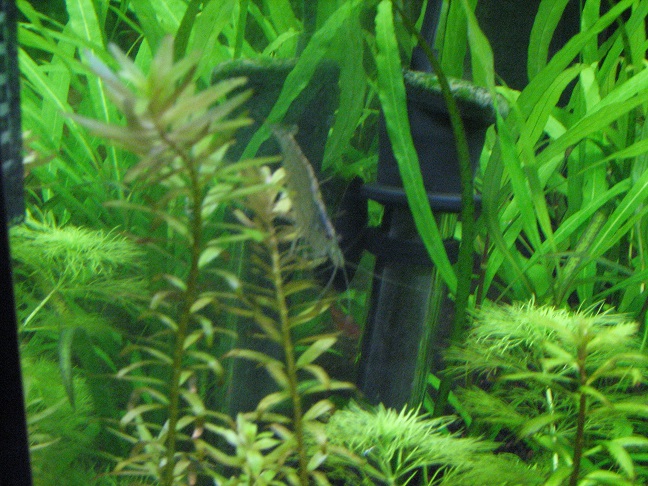 Over the course of the time I’ve been in aquatics, there’s a growing concern from many in the industry about the fragile sustainability of wild-harvesting tropical and saltwater fish.

With so many areas facing the threat of depleting wild populations as well as some areas closing the doors to wild harvesting due to the despicable and dishonorable harvesting tactics of SOME (by no means all) harvesters, it makes sense to encourage the breeding and raising of our aquatics here in tanks vs. the wild.

To do my part, and because I love aquatics anyway, I’m choosing some freshies and salties to specialize in and am working my way towards raising a sustainable population of my chosen fish.

Some will be a challenge, as there’s no known reports of some of my favorites spawning in captivity – but as Lain said, there’s always a first time.

So I’ll be studying each species (*does the Go Library dance*) and working on locating cheap/free tanks and equipment for this new venture. I must say though, if you’re new to the hobby it’s relatively easy to find the best 20-gallon fish tank, as most of them are ‘plug-and-play’ let’s say. However, if you’re a veteran fishkeeper and have kept fish for a while, you are more cautious of the equipment you use. It’s the same with this new venture; because I’m targetting a specific species like Amano shrimp, I need to ensure the water quality is perfect as most metal traces like Copper will harm them. It’s all worth it in the end though!

In the meanwhile, since I have the perfect set up already existing for one of my all-time favorites…Just purchased my first breeding pair of German Blue Rams! They ought to be in next week – so expect lots of pictures.

Wondering about the maggots?

One of the species I chose to raise is Amano Shrimp because A. I looove Takashi Amano’s tanks (the guy the shrimp is named after) B. they’re hands down the best shrimp for controlling algae in planted tanks. However, they’re one of the toughest shrimp to raise because of their needs. They have to spend their adult years in freshwater, but Amano eggs and larva cannot survive freshwater. So the majority of Amano young die in their parents’ freshwater tanks 🙁 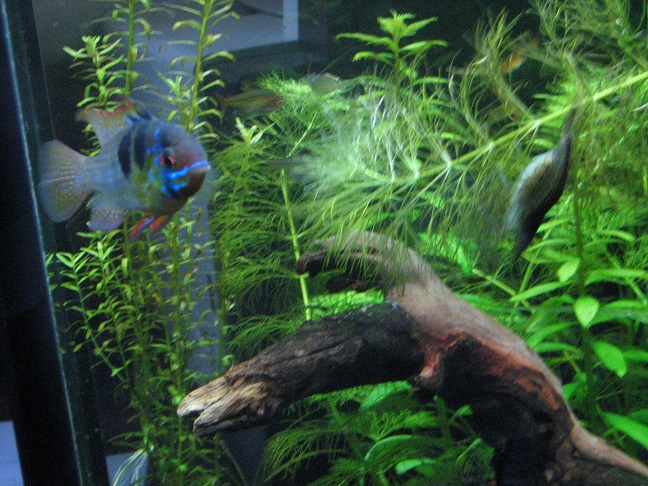 I was a little intimidated to start this process with the Amanos because of all the nay-saying I read when researching how to breed them. Someone on a website made the mistake of saying they weren’t worth the trouble when we can ‘just import them’. You guys know how I feel about constant importing…but really the first thing that came to mind was – for the challenge! I mean really, if people decided not to do things just because it was tough to do – where would we be? Mind you, I don’t pick difficult species on purpose… though eh, well that’s not always true, sometimes I do just because someone says it’s not possible and that just bothers me and then the persnickety side of me comes out and does a ‘Says WHO?’ And then I have to do it. It’s a terrible habit.

Anyway, back to the maggots.

Last night, that snickety streak hit and I made a nighttime foray into my 20g where I know my female Amano (shown above with Neptune the German Blue Ram) has been shedding ripe eggs. Using flashlight I attracted what I thought were eggs/larva to the light and then with a cut up thigh-high stocking (I have an issue paying what they want for those special nets made for larva…insane!) caught a bunch and put them – stockings and all – into the refugium on my saltwater tank.

Then this morning, went to bed thinking nothing of it. I figured that I might have just caught debris or even if it was Amano larva or eggs, they might not live or might have already been dead from being in the freshwater for too long.

Then, went to feed the fish in the salt tank and thought, eh, I’ll check the refugium just to see. And sure enough! It’s teeming with maggots! Eh. Larva. hehe

So now I know I can nab them and successfully get them swarming in saltwater. What’s left is making sure they’re well fed and grow into wee bity shrimp in saltwater and then slowly acclimating them back to freshwater to live out the rest of their adult lives.