Posted by Raven Bower on July 05, 2012 in Opening the Vein | Comments Off on Setting & Your Story 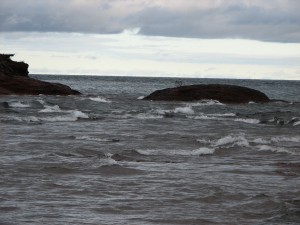 Setting is one of a writer’s most useful tools. It can help set moods, show glimpses into the viewpoint character and help solidify their lifestyle, their beliefs and their priorities.

To create vivid settings Lain and fall back on our standard – research and world building. Plus some additions of deeply knowing our characters and the art of observation.

For instance the Apparitions series is based exclusively in northern Michigan, with the final two novels being set in the remote Upper Peninsula. Why? I adore northern Michigan and one of my dreams is to one day live upon the mighty shores of Superior. Hey, we all have dreams right?

So when I was in the world of Apparitions, Wendigo and Rags Beneath it was easy for me to re-create that mythical feel that I so love. How? I’ve been there. I remember. All it takes is recalling it and then building a fictional town and county for my characters to reside, utilizing they key elements of the area. I couldn’t for instance, insert things more common in cities into these small towns and have the reader believe my story. They’d call BS and they’d be right to do so.

It’s simply an entirely different way of life and fiction ought to reflect the many different places in our world – not just mimic what one expects because we’re inundated with same-ness elsewhere. 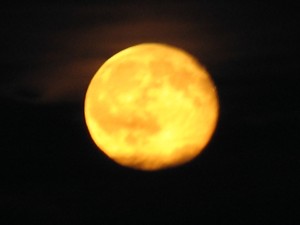 In Primal, I drew upon the feel of the night. There is a vast difference between energy on a full moon, half moon and new moon and this plays heavily into the Vengeance series. It was also fun to contrast the cities of Chicago and Detroit. Yes, they’re both cities and thus have much in common, but they have entirely different feels and entirely different populace. Then, contrasting those two with the woodlands around Marquette in the Michigan Upper Peninsula (I told you I love that area!) was a blast.

But, it also served a grander purpose – illuminating character. If you’ve read Primal, you probably caught onto it, if you haven’t I won’t spoil it here. Suffice it to say, there’s a lot of setting reflecting character and visa versa. 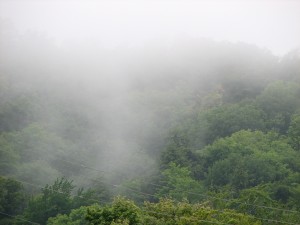 Fog rolling off the hills near Munising

When we enter into the realm of fantasy, like in Bleeding Edge and Nymph’s Lair, it’s really not that much different. The only major difference is that there’s more world building involved to keep the facts straight because these places exist only in our minds, hearts and spirits.

To create these fantastic settings we immersed ourselves in imagination but also in fact. There are certain things that will exist in a port town that wouldn’t in the middle of an ancient cemetery.

Where people choose to live says a lot about them because certain people are drawn to areas out of deeply personal motives and desires. Someone like me who loves forests, lakes and rivers is not the same sort of person who yearns for open plains with waving grasses, and they are of a different sort than someone who desires the glimmer sands of desert life.

Even if it’s a forced living arrangement, the setting can say a lot about the character and indeed, it’s a well used ploy in fiction to give a contrast between the character and their present living space. Someone in love with the city yet forced to the country might have a collection of say, impractical shoes that she can’t wear because the dirt tears the heels. Or maybe she does wear them and is sad over the chewed state of her leather. Perhaps he has lots of gadgets and gadgets, like an iPad etc that he can’t use because, vexingly, there’s no viable signal.

I’m running out of room here so more on settings & character later! Hope everyone had a great 4th of July!