Posted by Raven Bower on January 12, 2013 in Reviews | Comments Off on Movie Review ~ Demon Hunter 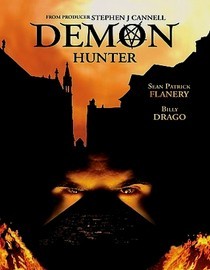 Generally speaking, I enjoy this genre and the stories portrayed of fell angels infiltrating human society. The movie was fun to watch and the main character, the demon hunter Jacob, was interesting. Sean Patrick Flannery brought realism to his role as a half-demon in the service of the Catholic Church.

The other actors were less than stellar, particularly the demon and succubus characters. They failed to instill a sense of danger or urgency because they always seemed so flippant and dispassionate about their goals. Instead, they seemed bored and as such, bored the daylights out of me.

If you’re okay with turning off your inner critic and brain, this movie is watchable and the dialog is fairly well written.

However, if blatant errors in commonly known philosophy bother you – then you may have issues with this film. I don’t do spoilers, so I’m not going to point the errors out here. Suffice it to say, the entire story line is grounded in error, even the hero’s inner conflicts are riddled with glitches. It was obvious that the screenwriter and/or director did no research into the field of demonic possession and demons before shooting this film. That or they ignored it, to their peril.

I found it difficult to overlook these flaws in basic philosophy and reasoning.

Also, the ending was…yeah. If you watch it, you’ll see what I mean. Without giving away too much, if a gun can’t kill a demon…how can strangling one kill it?

This film has many saucy scenes, it’s not one to watch with the kids.