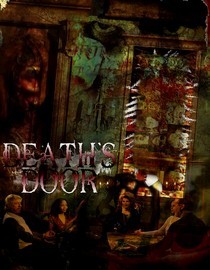 Okay, I’ll admit, I rented this largely for the cover art but really wasn’t expecting much of the film itself.

That said, I was pleasantly surprised.

The story revolves around the cast and crew of ‘The Séance Hour’, where they film what many of them, including the medium herself, believe are fake séances. There are many inter-personal issues between the characters that added to the drama and some that detracted from it.

Anyway, the show’s head honcho decides the pull a fast one on the medium – bad idea to begin with – and have a few surprise guests on the show: Reverend with a dotty past on the show along with a ‘killer’ who really isn’t a killer (if you watch it you’ll understand).

Things quickly spiral out of control and they’re trapped in the studio with a bunch of angry ghosts and one possessed dude. Some of the deaths were creative – like the screwdriver assault. Others, like the spontaneous combustion, just didn’t fly. It was so out of context for the supernatural that it seemed contrived instead of part of the movie. In trying to add too much diversity to the deaths, they fell flat on their faces.

Director George Scileppi has an eye for setting, he created a lot of havoc in one building without it becoming redundant. He kept the film at a balance between CGI and makeup. The ghostly brother, for instance, was spectacular as a real actor in well-done make-up.

The story was intriguing and loved the moral behind it – don’t mess with things you either don’t understand or don’t believe in. Just because you don’t believe in ghosts or the world of ‘other’ doesn’t mean it doesn’t exist and won’t bump back – so to speak.

The acting was mediocre, with the exception of one or two of the cast. And like previously stated, some of the storyline made no sense and some events seemed thrown into the pot for random ‘drama’. Didn’t work. Just made it seem clumsy.

Worth a watch though if ya like somewhat cheesy B’s  🙂