Posted by Raven Bower on August 21, 2013 in Reviews | Comments Off on Movie Review ~ Dawn Rider (Western) 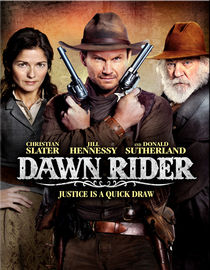 This is a really nifty film in the tone of the traditional westerns. Basic premise is – the father of a notorious gunslinger is shot by bandits and the gunslinger (Slater’s character) seeks justice.

There’s a love triangle in here that adds to the plot instead of detracting from it or derailing it. It was woven deftly into the main storyline. Well done!

There’s another interesting subplot involving a Marshal that, again, was expertly brought in and woven into the main line.

All three merge at the end and culminate in a clever ending.

I really appreciated the familiarity of the characters and how everyone was linked so solidly together. Not your typical strangers vs. strangers deal. This added both realism and emotional conflicts. I also enjoyed how the hero was both heroic and gritty – not your typical sterling goodie who makes you want to vomit because he’s just soooo flawless. Instead, the hero was a real human capable of mistakes and bad choices, yet still moral in his own way.

Also, what Director Terry Miles chose to show – and not show – of the various lines really made this film stand out.

Acting was all well done and the reactions and actions of the characters were believable and motivated by previous plot issues.

If you like westerns, this is a great one to watch.