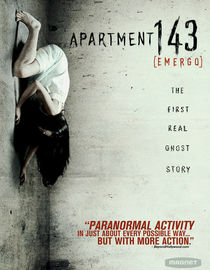 The best word for this movie is – predictable.  It’s obvious from the beginning who has issues (sorry, no spoilers here!) and one has a very strong idea of how the movie will unfold. There’s no twists and although there’s a lot action compared to a lot of found footage films – it doesn’t quite make up for the dull characters. Granted, in found footage films characters aren’t generally the focus but still, in most there’s at least one character that pops  or is likeable – no such luck here.

Pacing needed work. Though the setting was grungy, I didn’t find the movie to be creepy or scary. The creepiest scene in the entire movie is showcased on the DVD cover.

I did however, like how it ended and left the viewer wondering if the doctor’s assessment was right – or wrong.