Posted by Raven Bower on June 19, 2012 in Opening the Vein | Comments Off on Keeping it Real ~ Research & Fiction 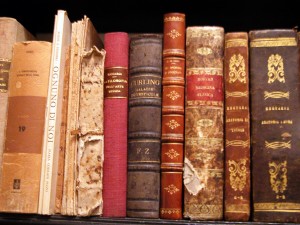 One of the most mind-boggling experiences I’ve had since venturing into the world of writing is the misconception held by those outside of the industry (or worse, those within!) that fiction doesn’t require research.

When people hear that I write speculative fiction a common reaction is – “Oh cool! So you just get to make everything up!”

If anything, a fiction author must know everything they possibly can about their subject matter, which requires a lot of research and brain picking. That said, there’s a fine line between what knowledge the author uses and what she leaves in the background. After all, the purpose of fiction – be it film or novel – is to entertain, not info dump. If the reader/viewer wanted a treatise on serial killers, they’d go read/view one.

Effective research will give you plenty of fodder to work with, increases reader trust and creates depth in the story world.

For instance, Apparitions is a supernatural suspense/horror novel so, I had to know everything possible about ghosts, apparitions and how they function. Since I have first hand experience with apparitions anyway, I already had a head start. But, my limited experiences weren’t enough. So thus began the massive collection of supernatural tomes in my library, Google searches and talks with priests on the Church’s official view of ghosts, talents etc.

Wendigo took a lot of research into Native American culture and demonology – complete with interviews from an Exorcist. As well as interviews with our local Under Sheriff for the Law Enforcement aspects and our local wildlife biologist about what animals in Michigan could mimic a wendigo attack (that was an interesting interview lol). Rags Beneath brought me to the stunning facts of human trafficking and some rather surprising stats on the top ‘importers’ as well as Michigan’s maritime history.

Primal was a research nightmare. Because it’s urban fantasy and a trilogy by nature – the story is huge with many echoes – there were many beasties to research and create. Plus research into druidic lore, spirits, Chicago, organized crime, art theft and Polish traditions. Not to mention, the Witness Protection program, US Marshals and the FBI. Granted, the Marshals couldn’t answer all of my nagging questions due to security issues – and that’s fine, I’d rather the people under their protection remain safe than get those particular details 100% correct – so much of that I fudged to story needs.

Weeping Dark: Bleeding Edge is an epic fantasy and needs an entirely different post as to the massive research required to build a believable fantasy world with believable characters. So more on that later.

Usually I start with the almighty Google search and see what I can kick up there. However, I never rely on internet searches for several reasons. The primary one being that some info out there is simply inaccuracies repeated over and over by people who failed to consult the pros.

Next step? You guessed it! Consult the pros. Don’t be afraid and skip this step. Professionals rarely bite, okay unless you’re hunting down covens of vampires or weres of assorted sorts – then I make no promises. Most pros  are pleased to talk about it and happy to answer questions. If you happen to run into someone who doesn’t – walk away and find another.

Once we have all of our data, we objectively analyze the plot and characters against what we’ve discovered. Sometimes that means adding nifty plot twists or character quirks, other times it means nixing a scene or aspect that, although cool, failed to keep it real.

Does that mean an author always has to be true to the real world? No. But, if you do choose to go against reality, you had better provide a reason why your world differs.

For example, in a vampire movie I recently watched, crosses didn’t work to thwart the blood thirsty undead. The writers made this credible by one simple line of dialog. “Perhaps it’s the people behind the crosses who fail to believe.” I paraphrased that, as I can’t remember the exact wording – but the point stands. Another way to validate the ineffective crosses would be to world build the vampires into something slightly askew of the ‘norm’, however that’s world building and the subject of an entirely different post.

We never let research bog us down so much that the creative end of writing ceases. Instead, we tag notes into our rough draft <need research on X here>, <Is this plausible?> etc. and get to them when our rough draft is done. Unless the answer would make a dramatic change, then we do it after our writing quota for the day is done.