Posted by Raven Bower on July 08, 2014 in Reviews | Comments Off on Book Review ~ Against the Druries ~ Steampunk / Sci-fi / Fantasy 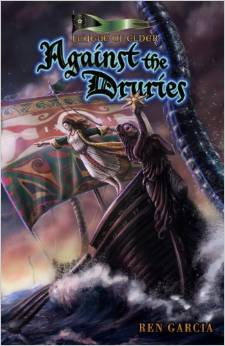 Another fabulous adventure from Ren Garcia!

Ren’s characters are visceral, vivid, three dimensional beings who spring to life on the page. They’re all flawed, interesting and exciting. He gives the reader enough to know the characters and yet, not know them so completely that they can’t be surprised. The balance is masterfully done.

The world building in The League of Elder is solid and just as balanced as his characters. The worlds and the space they inhabit are well conceived and come off as real as our own world.

As for the plot, well, you’re going to have to read it 😉 I can’t say much more than what’s said in the blurb without giving away mysteries that are better discovered during the reading.

That said, Ren’s storytelling ability is just as balanced as the world building. No dull parts or dragging scenes, it’s all focused and optimized to keep the reader turning the pages.

If you love new worlds and adventure, it is a must read. I do, however, highly suggest reading the first book in the Belmont Saga – Sands of the Solar Empire first.

I pestered Ren to see if another one is in the works – and he said yes! So expect more adventures!

There’s a whole lot of bad between Kana and Bazz . . . That’s what they say on Bazz, that the “Deep Sea”, the open space between the two planets, is cursed and full of bad dreams—but nobody ever listens to people from Bazz, do they?

Paymaster Stenstrom, Private Taara and Lord A-Ram struggle to navigate the Seeker, an old warbird, through the shipping lanes to Bazz. If the Paymaster can’t get to Bazz with his cargo of brandy, he loses the ship and will probably end up in jail as well. Jail? If only . . . The three adventurers are about to discover the old farfetched mariner stories are very real and that the Devil himself waits for the unwary in dark places where there is no help.

The Circle closes in on Stenstrom, Taara and A-Ram, and its judgment for them is far worse than any jail cell. The Seeker is about of become just another ship that set sail from safe shores and was never heard from again, unless . . .

The Belmont Saga concludes in this heartbreaking and action-packed tale of friendship and dedication, of vile evil and hopeless terror, and that sometimes help for those gone astray comes from the most unlikely of places.