Posted by Raven Bower on March 27, 2012 in Books | Comments Off on Apparitions (Bailey Khane Series – book one) 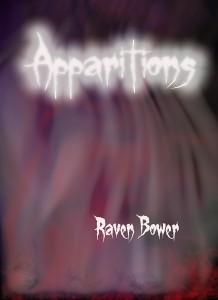 What people are saying about Apparitions:

“Raven Bower’s work shows an intimate awareness of the dark things and the malevolent side of human nature.  Unsettling scenes abound in APPARITIONS, and there’s not a doubt in my mind that we’ll be seeing much more of Ms. Bower in the future.  A writer with great promise!”
—Kealan Patrick Burke, Bram Stoker Award-winning author of CURRENCY OF SOULS, THE TURTLE BOY, and THE HIDES.

“With ‘Apparitions’, author Raven Bower manages to weave a suspenseful crime story with paranormal elements into a chilling read.  She reaches deep down into the razor-sharp wire of her imagination and cuts a tale of stark terror.  Definitely a writer to watch!”
— Darren Franz–author of Jack Frost & Ghost Train

“First-time novelist Raven Bower has written a genuine horror story, filled with twists and turns and enough chills to keep readers turning the pages… that is, until the sun sets.”