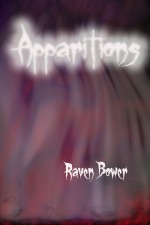 Book 1 of the Apparitions Series:

Available for your Kindle

“First-time novelist Raven Bower has written a genuine horror story, filled with twists and turns and enough chills to keep readers turning the pages…that is, until the sun sets.” — Steve Alten, NY Times Bestselling Author of MEG, The Loch and Grim Reaper: End of Days

“With Apparitions, author Raven Bower manages to weave a suspenseful crime story with paranormal elements into a chilling read. She reaches deep down into the razor-sharp wire of her imagination and cuts a tale of stark terror. Definitely a writer to watch!” — Darren Franz, Author of Jack Frost and The Ghost Train

Read a review of Apparitions Here